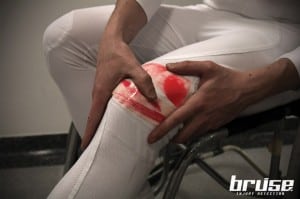 No one likes to feel pain, but we cannot deny that it is useful function in the human anatomy. Without pain receptors, the human body is unable to detect, and therefore avoid, injuries that we cannot see happening.

It’s like driving one of your wheelchair vans without rear and side view mirrors.

For those who suffer from paralysis, being able to detect injuries is often impossible in the upper and lower extremities. It is often a substantial reason for concern, as grievous injury can occur when pain the body is unable to identify areas of the body that come into harm’s way.

It is especially concerning for athletes with disabilities. When playing sports such as Murderball, Sled Hockey, or any other physical activity, injuries do occur, and identifying and treating them right away is essential.

Is it possible to simulate pain?

Not as of yet, but I’m sure that someone, somewhere, is currently working on creating artificial nerves that can sense and alert the brain of pain (if they figure that out, they may just cured paralysis altogether). But until that remarkable day comes, people who suffer from paralysis will just have to rely on the innovation of this nifty invention.

It’s called Bruise – the smart injury detection suit, and it has the ability to alert the wearer when the body suffers harm.

The Bruise injury detection suit allows the wearer to see, rather than feel, where an injury has taken place. The suit is covered in recyclable pressure sensitive film that reacts to pressure when it is applied (much like trauma from a blunt impact). There are separate sheets for high and low risk areas, so the user can be sure that they are alerted to the presence of all types of injuries.

When something hits the body with a great enough force, the sheets react by irreversibly changing color, allowing the wearer to see where an injury has occurred and how severe that injury is.

After quite a bit of research, development and testing, the Bruise suit is continuing along the path for development. It is something that professional athletes and regular consumers alike could benefit from.

The idea of the suit came from an interview with Paralympic sit-skier, Talan Skeels-Piggins, who expressed concerns about not being able to feel his injuries despite a high frequency of crashes during his training.

What do you think of the Bruise injury detection suit? Is this something that you could see yourself purchasing in the future? let us know in the comments below!