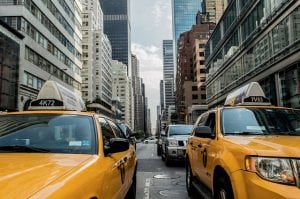 wheelchair accessible vans in their fleets. And with the rise of Uber, who are not yet required to comply with laws that require cab companies to offer wheelchair accessible vehicles to their customers, it is becoming even more of a struggle for people with disabilities to get a ride in busy cities such as New York.

This was all supposed to change come January 2016, but a new lawsuit filed this past week threatens to derail the entire initiative.

Initially, NYC cab companies were going to be required to make 50 percent of all their taxis accessible to people with mobility disabilities by 2020. As of now, only 581 of the city’s 13,587 yellow taxis are wheelchair accessible. This January, taxi companies were going to be increasing the number of accessible vans in their fleets, but environmental advocates may be throwing a wrench in the plan before it even begins.

The lawsuit, which was filed in the Supreme Court of New York states that none of the New York City Taxi & Limousine Commission’s (TLC) planned accessible taxis are compliant with an earlier law (§ 19-533).

The text of this law, titled the 19-533 Clean air taxis, states that the TLC must “approve one or more hybrid electric vehicle models for use as a taxicab.” The lawsuit alleges that none of the TLC’s accessible taxis comply with the hybrid/fuel-efficiency standards of this law.

A Problem for Everyone

While this complaint may appear to be reasonable on the surface, there’s just one problem with requiring taxi companies to purchase accessible wheelchair vans that have electric propulsion systems:

They aren’t readily available for purchase.

As we have written about before, it’s complicated enough for a cab company to acquire the taxi medallions required to put accessible vehicles on the streets of NYC. Adding in a layer of environmental regulation is going to further delay providing the necessary handicap access to public transportation that so many NYC residents require.

It seems that NYC has regulated itself into a predicament. Hopefully, this will all be sorted out soon so that 2016 can be the year that handicap accessible taxis finally become readily available for those who need them.

What do you think of the environmental and accessible regulations in NYC? Let us know in the comments below.