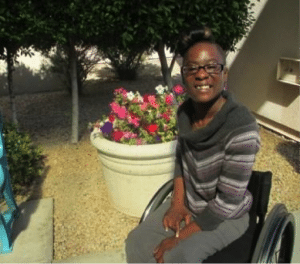 Skeptics told Latisha Anderson that she would never be successful as a paraplegic nurse. According to them, navigating the fast-paced, stress-filled environment of a hospital was impossible without a working set of legs.

But Anderson was determined to prove them wrong. She’s worked in a veterans hospital, a senior care center and psychiatric units. Not only has she received high praise from her professors and colleagues, but she has even won awards for her nursing leadership. Today, we would like to share her inspirational story with our community.

Anderson grew up in rough neighborhoods in Raleigh and Wilson, North Carolina, but she planned to join the Marines as soon as she was of age. In 1996, just two short months before she was to leave for the Marines, her cousin got into a fight with her boyfriend and fired a gun. Anderson, who was standing 20 feet away, was hit in the neck by a stray bullet and ended up being paralyzed from the breast down.

Although Anderson could no longer join the Marines, she wasn’t going to let this unfortunate circumstance get in the way of her future. She took it as a sign from God, that he led her to a passion for nursing to “help people get past the stigmatization of how disabled people serve in health care.” A few years later, she had completed a GED course at Wake Tech, and was ready to pursue a career in nursing.

Anderson found her next inspiration when she came across a newspaper article from the Honolulu Advertiser. That is where she learned about Barry McKeown, a former surfer who became paralyzed after a severe car accident. Despite what happened, Barry maintained a nursing career from his wheelchair, where he was required to work in an intensive care unit. Anderson wrote to him and asked for his advice, to which his response was, “All you need is a stand-up wheelchair.”

Anderson went on to finish nursing school at East Carolina University, the same place where she was treated for her gunshot injuries. After graduating with a 3.5 GPA, the school’s magazine featured a lengthy article about her success. “She had to do the same things that other students did,” said Dr. Donna Roberson. “She had to take CPR, turn patients and hang intravenous fluids. With her upper-body strength, she did it better than, say, some ‘able-bodied’ persons.”

Anderson furthered her education at Grand Canyon University, and they too published a great article about her achievements. “I think the fact that she’s had a lot of negativity thrown at her has sort of done the opposite,” said Samantha Chacon, a nursing practicum specialist. “I would never have thought her disability would ever prevent her from doing an amazing job. She didn’t let it stop her.”

Today, Anderson has a Master of Science degree in nursing and got a job at Central Prison in Raleigh, but getting the position wasn’t an easy process. The prison hired her sight unseen through a nursing agency, and when Anderson showed up to work on her first day, she was immediately sent home because the prison said they couldn’t use her. After filing a complaint with the governor’s office and sending out countless emails explaining her life’s struggles, the prison reinstated her. “If I have to be Harriet Tubman, so be it,” Anderson said. “But disabled people do have a place in this world and I will keep running my mouth.”

Latisha Anderson has proven to those skeptics that she is a successful paraplegic nurse, despite the fact that she is in a wheelchair. The video below shows her maneuvering in and out of her used wheelchair van as she discusses her experience with obtaining a job at Central Prison.

What are some obstacles you have had to overcome in your life? Please share your story in a comment below.