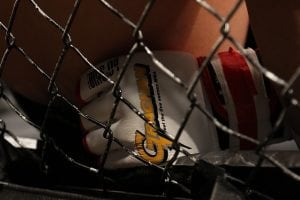 There’s no doubt about it: Mixed Martial Arts (MMA) is growing very quickly. Just last month, New York became the 50th state in the U.S. to legalize fights within its borders, and the world has taken to watching the fights sponsored by leagues such as the UFC (Ultimate Fighting Championship).

Almost everywhere you go, you will likely see gyms opening up to train young and eager fighters. UFC and Tapout t-shirts commonly worn by younger and older generations alike. In short, the sport is becoming widely accessible to everyone.

And now it has finally reached the disability communities.

In an interview with VICE, Colin Wood talks about the long and arduous process that was involved with setting up the first wheelchair MMA event.

His journey began in 2006, when he founded Wheeled Warriors, an inclusive combat sports organization that began with simple boxing lessons and matches. Fast forward to 2012, Wood and his team decided to move on to MMA. He would later announce the formulation of the Modified Mixed Martial Arts Wheelchair Warriors (MMMAWW), the first event of its kind.

Because of the controversy that surrounds MMA in general – many say that the sport is too dangerous and causes head injuries – the event was never allowed to take place. Now, he plans to hold the event sometime next year.

According to Wood, the event will involve four fighters who suffer from paralysis. They are all trained in Brazilian Jiu-Jitsu (BJJ), a martial arts style that was adapted from Judo and involves fighters using submissive maneuvers to subdue their opponent.

The men’s wheelchairs have been modified so that they can be used without their hands, allowing fighters to focus on on their attacks. The wheelchairs will also be lower to the ground so that falling from them is not as dangerous. Wood is currently working on new technology to add to the chairs so that fighters can be safely toppled from them.

He declined to mention more about the technology to VICE.

Wood has also designed a set of rules that differ from conventional MMA matches. Fighters will also be matched against people who have similar abilities.

Looking to the Future

This year, we saw the inaugural Arnold Classic Pro Wheelchair Competition, which matched wheelchair bodybuilders against one another. Although it’s still uncertain as to when the first wheelchair MMA fight will be, we at least know it is in the works, and we hope that we will be able to take our wheelchair accessible van to go see it.

What do you think of wheelchair MMA? Will it be too dangerous, or a lot of fun? Join the conversation by commenting below!