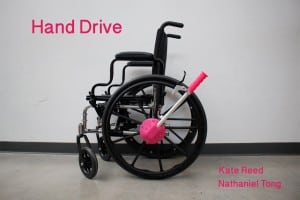 The modern world is rife with innovation and creative solutions to life’s problems. From handicapped van conversions to new wheelchair prototypes, society is swimming in a sea of new inventions, ideas and technology.

While too much of something is generally a bad thing, the world can never have too many bright and talented minds working on new inventions that  help the wheelchair-using community, which is precisely what this new invention can do.

3D Printing to the Rescue

The rise of 3D printers has certainly made customizing wheelchairs cheap and easy, and young inventors have been using the technology to create cost efficient hacks for wheelchairs. The most recent bit of technology comes from Kate Reed, an 18 year old student and performer from Boston, MA, who has been designing lever prototypes that cost no more than 40 dollars to print.

The lever prototypes can be attached to any wheelchair and allows them to be powered by a rowing motion.  Because this motion uses larger groupings of muscles, Reed claims that it will be better for a wheelchair user’s back, and because users won’t be touching their wheels, it will keep their hands more clean, as well.

The current prototype is comprised of 32 components, most of which can be 3D-printed. Her designs are all open-sourced and can be replicated and modified by anyone.

A New Way to Move About

Anyone who uses a wheelchair can attest to the fact that moving the wheels requires a rather inefficient set of motions. Over the years, many designers, inventors and entrepreneurs have set out to make it easier for wheelchair users to move from point A to point B, and have come up with some rather intuitive wheelchair prototypes.

They also tend to be quite expensive.

A traditional lever-powered wheelchair can cost anywhere from 2,000 to 10,000 dollars. Since most everyday people don’t have the funds to afford something like this, the technology is rather limited, and you rarely see people using these types of wheelchairs.

Reed’s creation solves the issue of money, and although 3D printers are still pretty expensive, they have been coming down in price. Even LCD televisions, which were once priced at thousands of dollars, can now be purchased for a few hundred dollars.

It’s only a matter of time before the average person will be able to customize their wheelchair in any way that they see fit.

For more information on the Kate Reed and her wheelchair hand drive, go to her Hackaday profile.

We want to hear your opinions on the hand drive. Let us know what you think of it in the comments below!