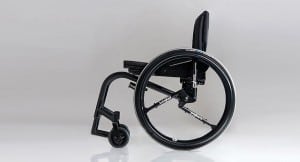 While many new wheelchair designs have surfaced over the years, from 3D printed wheelchair models to eye-controlled variations, few seem to change the overall basic design of the wheelchair.

This is usually a good thing because the inherent design of the wheelchair has proven, for the most part, to be an effective means of transportation for people with disabilities for centuries. While most people ascribe to the mantra, “if it’s not broken, don’t fix it,” Barel and his associates at SoftWheel have other plans.

The company’s Acrobat™ wheel replaces the traditional spoke and rim setup of your average wheel in favor of a new, intuitive suspension mechanism.The mechanism is capable of traversing successfully over all types of terrain and even makes it easier to go down a set of stairs.

When riding over a flat surface, such as concrete or pavement, the suspension mechanism remains static, keeping the wheel rigid so the chair can move normally. When rocky or uneven terrain is encountered, the wheel’s suspension system activates and absorbs the shock of the impact, rather than transferring it to the wheelchair’s frame or the user. Once the uneven surface has been passed over, the wheel snaps back into place and normal travel can once again resume.

Check out the Acrobat™ wheel in action in the video below.

The wheel is set to be released in United States and will start to appear on select wheelchairs soon.

Not Just for Wheelchairs

Although the initial design of the Acrobat™ wheel was meant for wheelchairs, its usefulness can transfer over to virtually anything on wheels. This could include anything from bikes to cars, wheelchairs and even handicap vans.

“With all due modesty, I say that what we have created is a game changer,” Daniel Barel told The Times of Israel. “Our wheel technology can be developed for and retrofitted to any vehicle.”

As a manufacturer of wheelchair vans, we are constantly looking for new ways to improve the technology that goes into our fleet. We can certainly say that this is something we will be watching closely as the technology progresses over the next few years.

What do you think of this new wheel design? Let us know in the comments below!