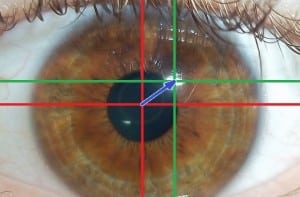 What do you get when you combine the precise control capabilities of eye-tracking technology with the ease of creating materials with 3D printing?

A wheelchair that you can control with your eyes, of course.

While the technology has been around for years (it’s precisely how Stephen Hawking controls his electric wheelchair and all its peripherals), it is rarely applied in such a way that the average consumer can afford to own the technology.

Unless you’ve written one of the most highly regarded books on space and time.

As is the case with any modern technology — from electric wheelchairs to the wheelchair vehicle — eye-tracking programs have a swarm of young students with nothing to lose trying to bring it to the masses in any way possible.

This time, all it took was a couple of German teenagers with big brains, and even bigger hearts, to make it happen.

How it Was Brought to Life

Fourteen-year-old Myrijam Stoetzer and fifteen-year-old Paul Foltin of Germany started experimenting with the technology for a local science and coding competition. They initially made a prototype that consisted of a webcam that was attached to a pair of safety glasses.

After moving on to (and eventually winning) the regional finals, the team had bought a working wheelchair and installed a device that could track a person’s eye movement to direct where they want the chair to go. Most of the parts were made with low cost 3D printing materials.

Lastly, the they installed a verification switch that is operated simultaneously with the eye tracking technology in order to prevent the chair from confusing movements commands with the user simply focusing on a particular object.

All-in-all, the prototype was a resounding success that is now registered in the creative commons for those who want to expand on their work.

One Plus One Makes a Better Life

Earlier this week, I wrote about FOVE, an Oculus Rift contender that is the first virtual reality headset to utilize eye-tracking technology to help a young boy with Muscular Dystrophy play the the piano in his orchestra.

We here at Rollx Vans also have a growing interest in how 3D printing can change the wheelchair industry by making it more affordable for anyone. By combining these two technologies, Stoetzer and Foltin have taken an amazing step towards bringing this technology to the common person who relies upon a wheelchair for mobility.

It’s only a matter of time before these two technologies are available to the mainstream consumer.

What do you think of 3D printing and eye-tracking technology? Can they really change the wheelchair industry? Let us know in the comments below.