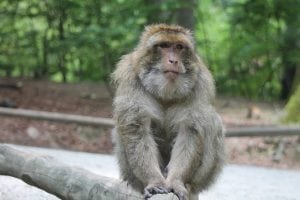 Today’s latest scientific discovery comes from a group of Swiss scientists at the École Polytechnique Fédérale in Lausanne, Switzerland, who successfully created a connection between a group of monkeys’ brains and their hind limbs, which they have been unable to move due to paralysis. This connection was made using something rather familiar to most people around the world: wireless communication.

You read that right: WiFi could one day be the cure for paralysis.

How Was This Done?

The research, which was published recently in the journal Nature, outlines how scientists brought together several different technologies to make this possible:

There is a precedent of research where brain signals have been used to control machines – the brain has been used to control different devices, and researchers enabled a monkey to control a wheelchair with its mind – but this is the first time that the science has gone wireless. This science not only has the potential to allow people who suffer from paralysis to move again, but they will also be able to do so without a ton of wires running from their limbs all the way up to their head.

The monkeys who took part in the study were able to think about walking, thus sending signals to the electrodes on their legs. While the system was powered down, the monkeys were only able to hop along a treadmill on their one functional leg. Once the system was activated, the monkeys began lifting and lowering the paralyzed leg and even placing weight on it.

The research group previously used this technology on a group of rats, and its advancement to testing on monkeys is a big step in the right direction.

At Rollx Vans, we always stay on top of the latest scientific research and studies. As a company that specializes on wheelchair van conversions, these types of discoveries are something that we hope will one day help out the disability community.